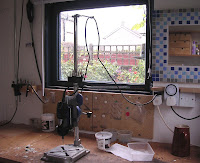 Any one who follows my various ramblings will know that I’m changing direction as a jeweller, gone are the tools that filled my little ‘Blue Box’ studio. I fancy trying my hand at lamp work bead making but time will tell if I have a flair for this – or not. Meanwhile, BBS, it’s blue, box shaped and my studio, nothing too original here, has moved home several times in it’s 10 year lifespan. These things are never meant to be taken apart and reassembled – endless removal men have told me this over the years as they baulk at the sheer size of the thing that are expected to move for me (and usually at some ridiculously inflated figure) – but BBS has done this several times so far. This time it didn’t go back together quite as well as it came apart. Things ended up in the wrong order, bits of internal wall didn’t quite fit anymore and there were gaps to be sealed everywhere. But I could sort that ‘tomorrow’. 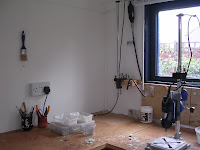 Tomorrow never comes. I have worked this way, zapping those terrifying spiders with the vacuum cleaner when they got too close for over 3 years. Enough was enough, something had to be done. Having made the big decision to sell my tools to fund a potential new project, I also decided that now was the time to blitz the place and make it cleaner, brighter, less cluttered. DH was bribed by the promise of a meal out if he’d give me a hand – on the pretence of I can’t do too much after the op on my arm, but mainly because he is less frightened of the spiders hiding behind the cabinets. 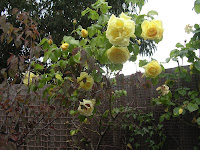 Several tubes of ‘No More Nails’ and filler later we had put up some polystyrene coving (it covers a multitude of gaps and is smaller and lighter than the plaster variety), drunk the health of the man who invented ‘pink’ white paint and completely decorated the place. Only the tatty MDF worktop now lets the place down. I don’t know whether to stain, paint or replace it or just put some kitchen worktop on top. But now it looks so bare. I’ve my trusty Dremel tools in place and in action for drilling sea glass but I’m not used to working so tidily or clutter free. I guess I’ll get used to it. 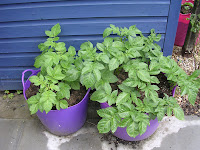 Meanwhile, a drop of rain and my potatoes are coming on a treat. The old yellow rose bush we inherited when we moved here benefited from a hefty prune last autumn and is now a riot of colour. The pink rose was threatened with eviction last year, it had been such a sickly specimen for years so I cut it right back and read the riot act; it clearly listened. And the cats followed me to the end of the garden in the pouring rain just in case they were needed. Having languished with the lurgy for a few days I’m feeling particularly uninspired to do anything except sleep but also feel I need to get making again, especially as my Folksy, Etsy and Big Cartel shops have been sorely neglected over the past couple of weeks with the time taken to sell the other things. 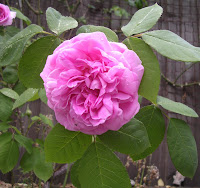 Now, if the plumber would like to turn up on Tuesday and start installing my new bathroom, freeing up our conservatory of assorted bits of sanitary wear, I’d have somewhere to photograph new work again. Time will tell if that will happen. The DIY store’s promise of ‘when you want it’ and ‘at the price you want it’ have both so far been sadly lacking! This should have been finished a week ago, but the plumber they were sending us became an ex-plumber and we had to wait for a new one to be found – who then revised the fitting estimate – upwards. It could only happen to us!

We use cookies to ensure that we give you the best experience on our website. If you continue to use this site we will assume that you are happy with it.OKRead more